The subsea service vessel SKANDI AKER, owned by the Norwegian company DOFCON ASA and built at STX Norway Offshore AS – Søviknes, was today declared Ship of the Year 2010 by the Norwegian State Secretary Rikke Lind at the SMM 2010 trade show in Hamburg.

SKANDI AKER is built according to the STX Europe OSCV 06 L design and is arranged for deep water riser-based intervention as well as for shallow water riserless subsea intervention, including subsea construction and installation work as well as maintenance work. These capacities are unique worldwide. SKANDI AKER cannot be compared with other so-called Well Intervention Vessels, she is technologically far ahead.

The vessel is capable of performing well intervention operations at water depths up to 3,000 metres, while other existing well-intervention vessels are limited to about 800 metres depth. Furthermore, and perhaps the most striking technical feature of this vessel, is that she can operate as a light drilling unit, and thus the ship has been classified as both ship and drilling unit.

SKANDI AKER is operated by Aker Solutions, which is the company responsible for designing the vessel’s well intervention system and solutions. Essentially, the vessel is able to perform deepwater well intervention services that oil companies previously needed expensive drilling rigs to conduct.

It is thus evident that when it comes to technical features this ship is in the forefront in this field today. Instead of labelling her narrowly as well-intervention vessel, well cleaning vessel, vessel for coil-tubing or as a drilling unit, the shipyard has introduced the collective term “Subsea Service Vessel”.

The vessel has a diesel electric propulsion system, and her dimensions are impressive: 156.9m l.o.a., 27m breadth and depth moulded of 12m. The deck measured about 2,100 m2 prior to installation of the rucker deck and derrick.

SKANDI AKER is built to DNV class @1A1 with ICE-C, Well Intervention Unit, COMF-V(3)C(3), DYNPOS-AUTRO (IMO III), NAUT-AW and CLEAN DESIGN to mention some of the notations.

The prestigeous SHIP OF THE YEAR-award is instituted by the major Nordic shipping magazine SKIPSREVYEN. Price candidates are nominated by the readers of the magazine, but the final election is the responsibility of a jury consisting of the former MD of the Norwegian Shipowners’ Association Mr. Rolf Sæther and the MD of the sales and marketing organization Norwegian Shipyards, Mr. Birger Skår and Publisher of SKIPSREVYEN, Mr. Asle B. Strønen. 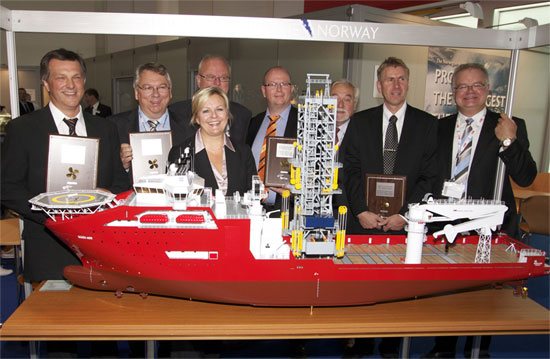